In today’s post we take a close look at the 10 most polluted rivers in the world right now. We explain the causes, the impacts and the long-term effects of these environmental catastrophes.

It’s an interesting read, but be warned it’s not exactly an uplifting one. Here are the world’s dirtiest rivers… 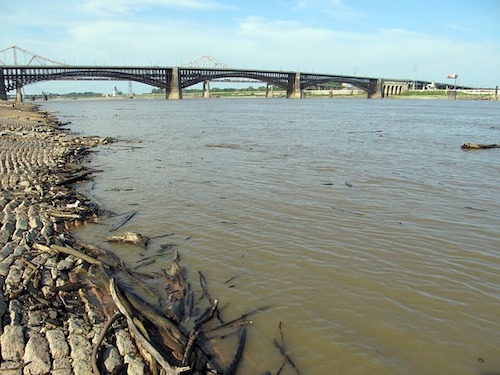 Polluted with: Accumulated agricultural runoff along the course of the Mississippi River delivers 1.7 million tons of phosphorus and nitrogen into the Gulf of Mexico every year, creating a seasonal “dead zone” that measured 8,776 square miles in 2017.

Why: The last 50 years have seen large scale development in the Mississippi River basin, with forests and wetlands being converted into farms and cities.

Pollution on the Mississippi River is largely due to agricultural runoff from agribusiness in the Midwest. Although Iowa comprises less than 5% of the Mississippi River basin, it contributes over 200,000 metric tons of nitrate discharge every year, about 25% of all the nitrate in the river.

As industrial farming depletes nutrients in the soil, farmers add chemical fertilizers.  The amount of feritilizers are in excess of what can be used by the plants and seeps into the ground water and into the river.

In addition, the breakdown of animal manure from large livestock operations also contributes nitrogen and phosphorus to the ground water.

As cities along the river have expanded in recent decades, urban runoff and human waste have also contributed to the pollution in the Mississippi.

When the waters of the Mississippi empty into the Gulf of Mexico, these pollutants cause a hypoxic “dead zone” in which the water has no oxygen and cannot support aquatic life. This dead zone impacts the location, size, health, and reproductive abilities of fish and marine life in the Gulf of Mexico, which in turn impacts local fisheries and the prices of seafood.

Important for: These rivers flow through the Manila metropolitan area, delivering water to hundreds of thousands of people and irrigating crops and agriculture. In 2007, it was listed as one of the most polluted places by the Pure Earth institute. Pollution from these rivers empties into Manila Bay, contaminating the ocean and impacting local fisheries

Polluted with: Industrial waste along the Meycauayan River, tanneries and lead recycling facilities in Marilao, human waste and trash in Manila. The water contains high levels of lead, human sewage, and the carcinogen hexavalent chromium.

Why: The different distinct rivers in this system are all dumping grounds for industrial and manufacturing waste, which accumulates in greater and greater quantities as it reaches Manila Bay.

Parts of the Marilao River are so polluted that the water contains no oxygen and therefore cannot support aquatic life. It is one of 50 “dead” rivers in the Philippines.

Important for: The ancient Romans called it Sarnus, and it passes through Pompeii to Naples. It is the most polluted river in Europe. It is a source of contamination in the marine environment of the Bay of Naples.

Polluted with: Industrial and agricultural waste, resulting in a high level of polycyclic aromatic hydrocarbons (PAHs) and heavy metals.

Why: While the Sarno is still used for transportation and fishing as it has been for millennia, but by the time it reaches lower elevations, it has accumulated a thick chemical scum on top. Unfortunately, the population of nearly a million people along the lengths of the river, the proliferation of agricultural and industrial activities including tanneries and garbage dumps, and economic troubles in Italy have made the situation difficult to resolve.

The first effort to clean the river was begun in 1973, an official state of emergency was declared in 1995, a new commissioner was declared in 2003, and the situation was largely unchanged in 2011.

The human health impact of pollution on the Sarno has increased dramatically, including increased rates of degenerative diseases of the respiratory and digestive tracts, bacterial infections, and neoplasia for those who use the river for agricultural and animal products. Decades of activists calling for change have had little effect on the health of the river.

Important for: The Yellow River is the second longest river in Asia, and the sixth longest river system in the world, at 3,395 miles. The river was the birthplace of Chinese civilization, and was associated with the prosperity of ancient China.

Why: The Chinese refer to the Yellow River as The “Mother River” and “China’s Pride” as well as “China’s Sorrow” and “Scourge of the Han People” due to its history of devastating floods.

Floods on the Yellow River are the only natural disasters in recorded history to have cost more than a million lives, and it has done so repeatedly, most recently a 1931 flood that killed as many as 4 million people.

In recent years, the rapid expansion of China’s industries has led to an explosion of pollution on the Yellow River, totalling more than 4 billion tons of waste dumped into the river every year. Testing completed in 2007 showed that one third of the water in the Yellow River system was so polluted that it is unusable by humans for any purpose, including industrial or agricultural use.

Industrial and manufacturing waste makes up 70% of the pollution in the river, with household waste accounting for a further 23%. 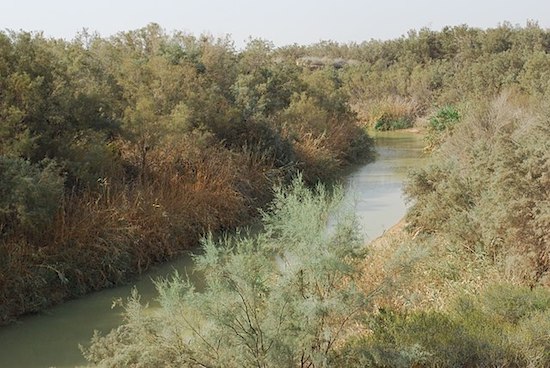 Important for: The River Jordan is of religious significance in Judaism and Christianity, and supplies fresh water to a region that is experiencing increasing water shortages.

Why: The Jordan suffers from two concurrent problems. The shortage of fresh water in the region has led to multiple dams along its tributaries, to provide water for cities and agriculture.

These dams have reduced the flow of water in the river itself, leading to a greater concentration of pollutants than if it were flowing at greater strength.Meanwhile, the remaining water that does flow through the Jordan accumulates untreated sewage and agricultural discharge.

The river is an important pilgrimage site for Christians, who believe that Jesus was baptized there, and yet for several recent years baptism in the Jordan has been prohibited for health reasons. Baptisms can now only be done at certain protected sites.

Important for: The Yamuna is the longest tributary of the Ganges, with 855 miles that make up 40% of the Ganges basin. It is also of religious significance to Hindus.

Polluted with: Household and municipal waste, soil erosion and agricultural runoff, and discharge from commercial and industrial sites.

Why: The Yamuna originates in the Yamunotri Glacier and accumulates waste and pollution until it is little more than a sewage-bearing trickle.

By the time it leaves Wazirabad barrage in northern Delhi, it has high coliform bacteria content and BOD values ranging from 14-28 mg/l.

New Delhi dumps about 58% of its waste into the Yamuna, and most sewage treatment facilities are underfunded or not operational. The Yamuna is stagnant for 9 months of the year, exacerbating the pollution problem.

Important for: The Buriganga River supplies water to the capital city of Dhaka, and is crucial for trade and travel within Bangladesh.

Most of the nine industrial areas surrounding the city have no sewage or effluent treatment facilities at all, meaning that 80% of the sewage in the city is untreated and dumped into the river. The pollutants have deprived the water of all oxygen, killing all local aquatic life, and in parts of the river the water is frequently black with a gel-like consistency, and emits a foul odor. Over 4 million residents of Dhaka are affected by water pollution every day.

Important for: The Matanza/Riachuelo River supplies most of the water for the capital city of Buenos Aires, ranked one of the top 10 most toxic sites in the world in 2013.

Polluted with: Industrial waste from local factories and tanneries, including heavy metals, giving it the nickname of “Slaughterhouse River.” It has high levels of arsenic, chromium, copper, zinc, and lead.

Why: An estimated 15,000 industrial sites release effluent into this river, including chemical manufacturers. 20,000 people live in the river basin, and 60% of them live in territory deemed unsuitable for human habitation. Around 80% of the water wells in the river basin are unsafe for drinking.

Pollution in the Matanza and Riachuelo rivers is thought to cause diarrheal and respiratory diseases as well as cancer. 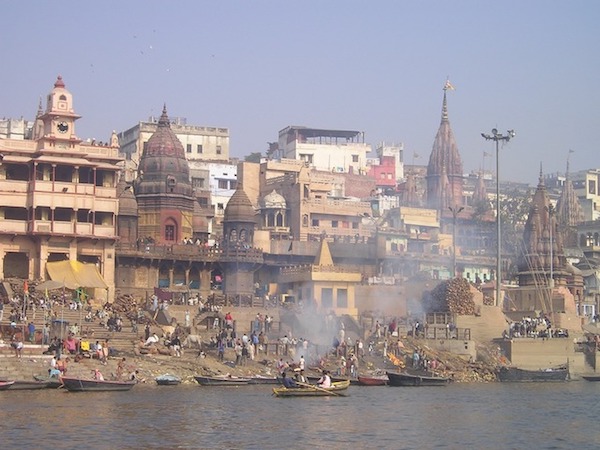 Important for: The Ganges is the third largest river in the world by discharge. The most sacred river to Hindus, the Ganges is actually worshipped as a goddess. More than 1,500 miles long, it provides water for cities, irrigation, and industry, and hundreds of millions of people rely on the Ganges in their daily lives.

Polluted with: Accumulated sewage from the cities along the course of the river. In addition, the large number of non-biodegradable religious offerings, funeral rites, and industrial waste combine to make the water polluted and hazardous.

Why: As the Ganges passes through the city of Varanasi, an important site for pilgrimages and religious rites, as well as home to over a million people, it becomes polluted with over 32 streams of raw sewage from the city.

When it leaves Varanasi, the Ganges has been tested to have levels of fecal coliform bacteria at levels of over 100x the legal limit in India. Pollution in the Ganges threatens 140 fish species and 90 amphibian species, and the large volume of bacteria in the water carries a high risk of human infection when drinking or bathing.

The Ganges is also a site for many Hindu funeral rites, and bodies that die of contagious diseases like pox and leprosy are disposed of in the river, as are the bodies of the poor and of children. While many rituals call for bodies to be burned and the ashes scattered in the river, many people can’t afford the amount of wood necessary to completely burn a body. This means partially burned bodies are also floated downstream in the river, adding to the pollution and health risk from the water.

1. Citarum River, Indonesia – The Most Polluted River in the World 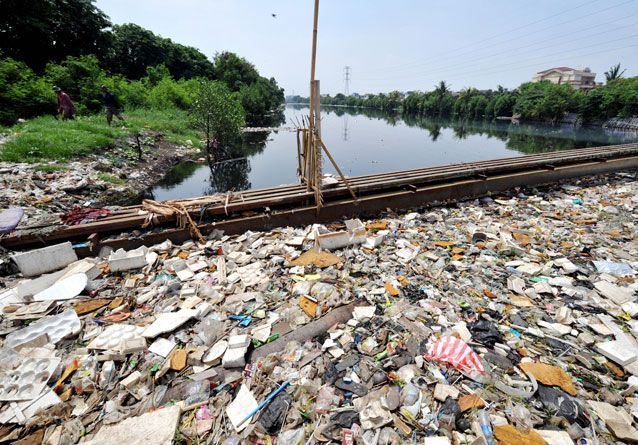 Important for: The largest and longest river in West Java, the Citarum provides 80% of the water for the 5 million people living in its basin, and is used for agriculture, water supply, fishery, industry, electricity, and sewerage.

Polluted with: Industrial waste, including lead, mercury, arsenic, and other toxins.

Why: Every single day, 20,000 tons of waste and 340,000 tons of waste water are dumped into the Citarum from 2,000 nearby factories. The river has been shown to have lead levels 1000x over what the United States considers safe in drinking water. More than 60% of native fish species no longer live in the river.

Unfortunately, dams along the river collect this polluted water and use it for Indonesia’s largest water reservoir, supplying water to the capital, irrigating 400,000 hectares of rice paddies, and supplying hydroelectric energy for three cities.

The levels of water pollution have forced many farmers to stop growing rice in their fields, and many residents suffer from skin diseases due to water pollution.

If you enjoyed this article then make sure you follow us on social media to be notified of lots more like this in the future. Just click the link on the right of the page.

Ever heard of water poisoning? Learn all about it here.