Ever wondered why water can’t just be made? We explain the drawbacks facing scientists and what can be done instead.

Water or H2O as it’s scientifically known is in scarce supply these days. With an ever increasing population, how are we going to provide clean drinking water in years to come if we are already struggling?

Ever wondered why we can’t just make it ourselves?

I mean it’s just H2O right? These elements are abundant in nature. Get two hydrogen atoms and one oxygen atom, bash them together and we’ve got water!

Well sadly it’s not that simple. In today’s article we explain why this isn’t possible and what avenues we can take instead. The answers may surprise you.

Contents hide
1 How water is made
2 How could we safely make water?
3 Harvesting water instead of making it
3.1 Conclusion

How water is made

Water is the most studied chemical compound in history, and its compounds: hydrogen and oxygen, are among the most plentiful elements in our universe.

Hydrogen atoms have only one electron each. An oxygen atom has six electrons, forming a nearly complete shell, with room for only two more electrons. The resulting strength of the oxygen atom means that tremendous force is necessary to overcome its energy barrier and allow it to accept more electrons.

Hydrogen is a highly flammable gas, and oxygen supports combustion. While we rely on water to put out fires, the two basic components of water are both highly flammable when left to their own devices.

Water was originally produced as a result of the formation of stars. When a star is formed, it’s accompanied by a strong outward pressure wave of dust and gas. When this outward wave meets the surrounding gas particles in space, the pressure compresses the elements and heats the gas, quickly forcing atoms to form bonds and produce water vapor.

Therefore, space is full of enormous interstellar clouds, and water is actually common in the universe and in our galaxy. In fact, one of the moons of Saturn is made almost entirely of water. 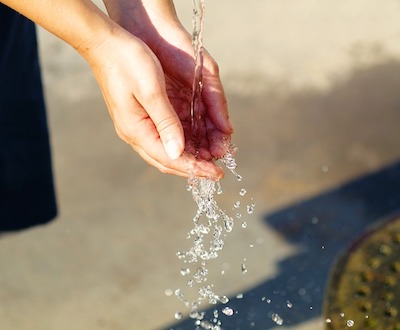 So we know that we can create water if we have enough hydrogen and oxygen, and enough pressure to force them to bond. Unfortunately, the pressure involved requires such force that it takes the form of an explosion.

The Hindenburg disaster of 1937 is an example of the destructive force that pure hydrogen can have. The Hindenburg was a hydrogen-filled airship, and its explosion produced an estimated 160 metric tons of water, in addition to killing 36 people. And the water produced by such an explosion would not necessarily be drinkable: it would have been contaminated with fuel and other chemicals and debris released in the explosion as well.

This principle is commonly demonstrated in science classes with the “hydrogen pop” test. Hydrogen is collected in a small, upside-down test tube, and then a lit match is applied to the open end of the tube. There is a noticeable “popping” sound, and water vapor is formed inside the tube.

How could we safely make water?

If we were to attempt to make enough water to ease world water shortages, we would first need to create highly purified hydrogen and oxygen. Otherwise the resulting water will be contaminated and not drinkable.

While we do currently have these technologies, they are extremely inefficient and expensive. We can’t produce large volumes of the elements at the necessary purity. 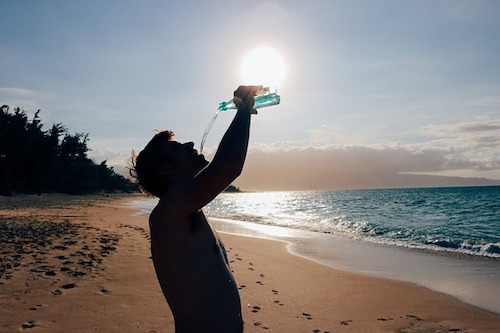 Harvesting water instead of making it

While there are a lot of obstacles preventing us from making water, there are still some innovations being made to help ease global fresh water shortages.

A large percentage of our fresh water remains undrinkable, due to either natural or man-made pollution and contamination. In theory, this water could be purified with filters to remove impurities, and decontaminants to kill organic microbes, and be made fit to drink.

Currently, we have the technologies and capability to purify water one bottle or household or person at a time, but we don’t have good systems for purifying water at a large scale for whole cities or communities. But these technologies are being developed and improved in water-scarce regions all over the world, and we may soon have good, cost-effective, large-scale water purification capabilities to undo the damage done by pollution.

About 97% of the water on earth is salt water, unsuited for drinking. In parts of the world where there is severe, ongoing shortage of fresh water, removing salt and minerals from sea water is a potential large-scale solution to water scarcity.

Today, 100% of the water in Kuwait is mechanically desalinated water, and more than 300 million people around the world are drinking desalinated ocean water.

Desalination is controversial because it is expensive and requires a large amount of energy, potentially putting it out of reach of the poorest people, who are generally those who need it most.

Desalination also produces waste in the form of highly-salted mineral brine. Returning large quantities brine to the sea has the potential to have far-reaching environmental consequences.

3. Harvesting water from the air

Several new models of devices have been invented that use turbines to cool water vapor in the air as clouds. When the vapor is cooled, it is condensed, and collects on the turbine as water.

These devices effectively harvest water from the atmosphere, producing clean rain water on demand. However, we do not yet have large-scale models of these devices.

These devices may also have unforeseen environmental consequences, because atmospheric water vapor is part of the global water cycle. Draining a cloud may eventually be seen as something akin to damming a river, diverting the water from its original destination.

All over the world, people are working on solutions for water scarcity, trying to provide for the needs of the global population now and into the future.

We may some day invent the technologies that allow us to simply and safely make water out of hydrogen and oxygen, and scientists are no doubt working on the problem right now.

In the meantime, conservation and preservation remain the best way for us to care for this resource for generations to come.

Still got a thirst for more water knowledge? Check out our recent posts on hard water and alkaline water.

Join our Facebook to page to stay notified of all the latest articles and news here at TheWaterGeeks.com