Home » Environment » Why is the Ocean Salty?
EnvironmentScience

We answer another frequently asked question about the world’s oceans in today’s post at TheWaterGeeks.com 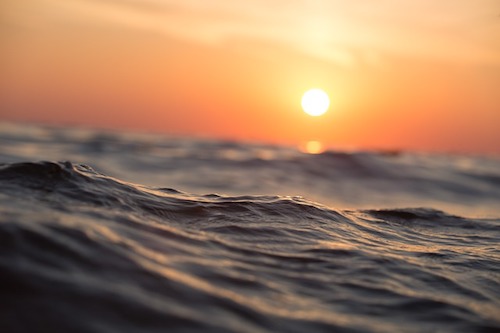 In this article we’ll explore the natural processes which have created the seas and oceans as we know them, and delve deeper into just why they happen to be salty.

We’ll also explain why ingesting sea water is a really bad idea for your health.

Finally, we tell some of the old folk-tales that different cultures used to tell to explain why the sea is salty.

So, grab a cool glass of fresh water, and let’s uncover some of our planet’s oldest secrets together.

Contents hide
1 The Water Cycle – the Key to Understanding Water’s Saltiness
1.1 Is Sea Water Equally Salty Everywhere?
1.2 Why Can’t We Drink Salt Water?
2 The Answers in Folklore
2.1 The miraculous coffee mill from Denmark
2.2 The ocean and the salt maker from the Philippines

The Water Cycle – the Key to Understanding Water’s Saltiness

To be able to understand why sea water is salty today, we need to travel back in time, waaaay back. Billions of years ago, the Earth’s crust was just starting to cool and with it the first solid landmasses started appearing.

Back then, the atmosphere was still thin and ground water non-existent. What water there was existed in form of vapor which, as the surface became cooler, started escaping out into the atmosphere, condensing and falling back onto the ground.

Once the ground was cool enough for the water to not instantly evaporate, the first stable bodies of water started to form.

We don’t know much about these proto-oceans, but scientists speculate that they were less salty than today’s oceans. The reason for this is that the water cycle, the process which governs water’s evaporation, condensation, precipitation and accumulation, wasn’t going on long enough to amass enough minerals inside of them. 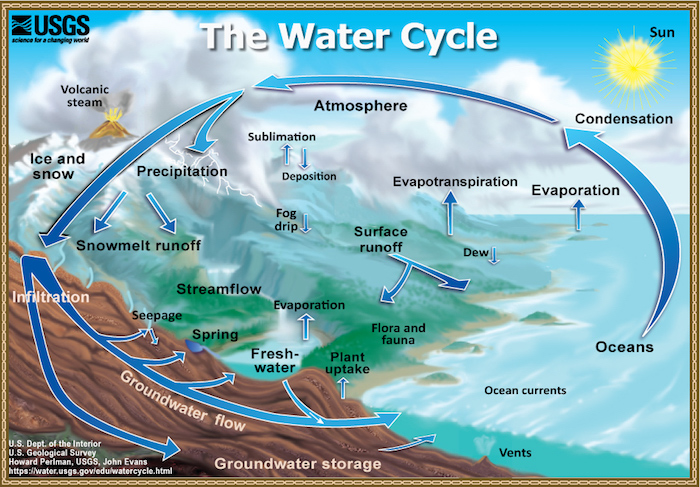 The water which evaporated from within the earth, and which now evaporates from sources of fresh and salt water, is for the most part free of impurities. As it enters the atmosphere, the water mingles with carbon dioxide molecules present in it, forming trace amounts of carbolic acid and becoming slightly carbonated. This carbonated water has mild acidic properties.

Once it has fallen back to the surface, the acidity in the water helps it slowly but steadily dissolve the soil and minerals it comes into contact with, carrying away chlorine and sodium ions as it passes. Natural waterways form that transport both the fallen and underground water into the seas and oceans, which are in essence enormous “static” water accumulations. 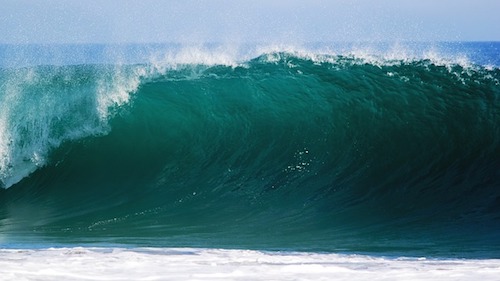 All the while, water is also evaporating. The newly evaporated water sheds its “baggage,” leaving the various salt-forming ions behind on the earth’s surface. In moving bodies of water like streams and rivers, or in lakes which have a regular influx of fresh water, these elements don’t have time to settle as they’re swept up and carried forth by the never-ending stream. When the fresh water reaches an ocean or sea though, its movement stops, and the sedimentation of salt starts.

Free to settle down, sodium calcium and various other salt-making elements start to mingle and produce salt. This is a long geological process which finds validation in some longstanding surveys that reach as far back as the 1950s, which when examined over time suggest that most of the world’s oceans and seas are indeed getting slightly saltier. 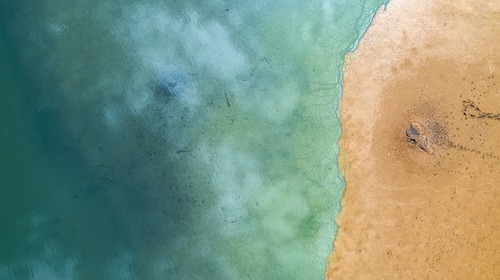 There are marked difference in the saltiness of different seas and oceans, and differences can be present within the same one as well. Sea water’s saltiness or salinity is measured by taking samples and then determining their salt content. This is usually expressed in grams per kilogram. The Atlantic and Pacific Oceans are good reference points. Both contain 35 grams per 1 kilogram of water, meaning that their salinity is 35%.

Not all sea water can be considered truly salty though. The Baltic is the least salty sea in the world. With a low salinity of just 10%, it is considered to be brackish. 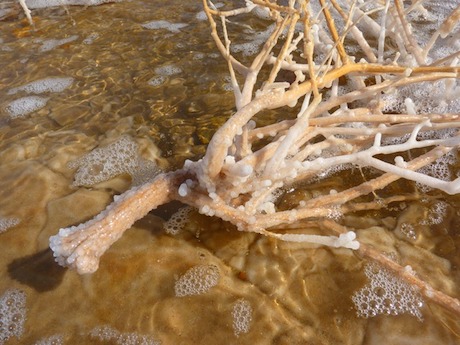 A salt crust formed by the Dead Sea

Opposite extremes also happen. The Dead Sea for example has a salinity of a whopping 337%, so essentially one-third of a kilogram of water scooped up from this sea is actually salt!

If we look back at the water cycle, this makes sense – the Dead Sea is an isolated body of water which is steadily shrinking. Any rivers which might have fed it have long since dried up, and its connection to the Mediterranean has been severed too. As no new water is replenishing that which evaporates, the sea’s salt concentration continues to rise.

Why Can’t We Drink Salt Water?

As Samuel Taylor Coleridge so aptly puts it: “Water, water, everywhere, nor any drop to drink,” it is a great irony that we absolutely need both water and salt to survive, yet taking either from the most abundant source of both on the entire planet would be a terrible idea.

In short, there’s just too much salt in seawater for our bodies to process. We use salt to maintain a chemical balance within our body, and the main way of diluting salt’s concentration within it is drinking fresh water. Our kidneys are responsible for excess salt extraction via urine, which is in itself salty, yet not nearly as much as sea water. Not even water from the Baltic would be fresh enough to save you should you find yourself stranded somewhere between Sweden and Estonia. 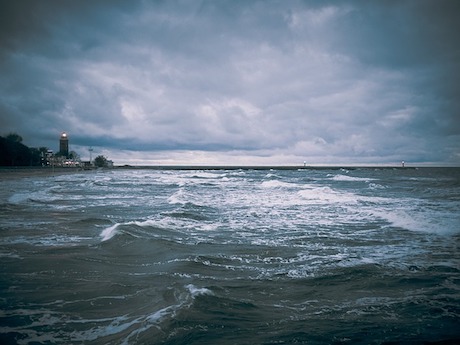 As sea water is saltier than urine, you’re actually speeding up your demise by drinking it – expelling all the salt from the body takes more water than you get from sea water, so to compensate your cells release more water which won’t be compensated, leading to faster dehydration. The excess of sodium ions in one’s blood is known as hypernatremia. Strong thirst and nausea are telltale signs of its early stages. If left to go on for too long, the consequences become exponentially more severe – from a sense of confusion and involuntary muscle spasms all the way to internal hemorrhaging near one’s brain and eventually even death.

We’ve got a great article on hyponatremia. Check it out here.

The Answers in Folklore

A long time ago, people did not have access to the information that we have today, but they still had the same questions. Many of them also wondered why the sea is salty, but they had to come up with interesting stories to answer those questions. Here are some of the most famous legends.

The miraculous coffee mill from Denmark

According to this legend, there was once a little boy named Hans. Hans had no parents and lived with his grandmother. One day, the grandmother got very sick and just before she died, she gave him her most precious treasure, her coffee mill.

She told Hans that if he ever needed something, he just had to ask the mill to grind it for him. The mill would grind it, but then he had to give it a special command to stop. Understandably, this mill changed Hans’ life for the better, and after his grandmother died he was able to survive thanks to the coffee mill.

Hans eventually decided to sail the world and see faraway places. He got a job on a ship, but the other sailors were jealous of him and gave him very little food. Hans didn’t mind their bad treatment since he got everything he needed from the coffee mill. The other sailors were curious and decided to spy on him. When they saw what the mill could do, they threw poor Hans into the sea and stole the coffee mill.

The greedy sailors wanted to get rich, so they ordered the mill to start grinding salt for them to sell. Unfortunately for them, they never knew about the special command that they had to give to the coffee mill to make it stop. The coffee mill kept grinding until the ship sunk, and since no-one has given it the proper command to stop, it is still grinding salt to this day.

The ocean and the salt maker from the Philippines

There was once a poor man named Pedro who would always borrow money from his friends and neighbors to get by. He always promised to repay his debt, but never could. One day, he rowed his boat to a nearby island looking for new people to meet.

On one abandoned island, he happened across an abandoned lamp. He picked it up and wondered how much he could sell it for. When he cleaned it, a genie popped out and offered him an escape from his poverty. The genie offered to grind enough salt for him and his family. But the genie had conditions. First, he had to promise to share his new income with his family and friends. Secondly, he had to come to the island to fetch his salt. The lamp could not leave the island.

The man eagerly agreed and took all the salt he could carry. He sold it, and he was able to feed his family well. But a greediness had settled into his heart and one day, he took the lamp home. Nothing happened at first, but then the lamp started spewing salt. It would not stop, and eventually the boat sank. Some say that the lamp is still releasing salt to this day.

Nowadays, we have a lot more information than our ancestors on the environment and the science that explains natural phenomena. Thankfully long gone are the days when you had to come up with elaborate stories to tell why the ocean is salty. Although a coffee mill that grinds salt is an amusing story, I’d much rather stick with science.

The saltiness is not a result of a vengeful genie, but rather a process that has been going on for as long as there has been water on earth. So, next time it rains, just think about how much saltier the earth is becoming.

So that’s why the sea is salty. If you have any questions then get asking down below.

Learn what causes water shortage and what can be done about it in our latest article. We’ve also got an awesome article on water pollution that’s well worth a read!

Added to wishlistRemoved from wishlist 5